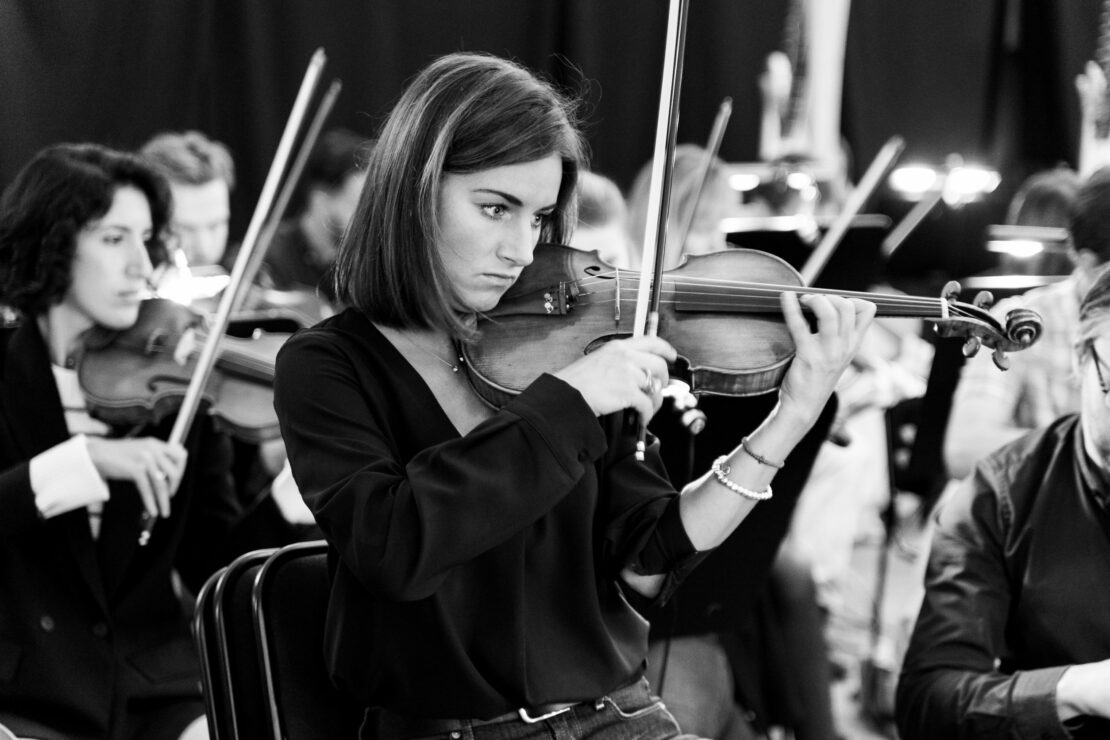 In the orchestra since 2022

Born in Vladivostok, at the age of seven she gave her first violin recital, and at ten she made her debut on stage with a symphony orchestra. She graduated from the Central Music School of the Moscow State Tchaikovsky Conservatory (Irina Bochkova’s class), the Cologne University of Music (Zakhar Bron’s and Barnabás Kelemen’s classes), studied at the Queen Elizabeth Music Chapel in Brussels (Augustin Dumay’s class).

In September 2022 she became concertmaster of the musicAeterna Orchestra.

She gives master classes in Russia, Germany, Austria, Italy, Spain, and Belgium on a regular basis.

HOW DID YOU COPE WITH LEARNING MUSIC AS A CHILD? HAVE YOU EVER HAD A DESIRE TO QUIT IT?

To be honest, I don't even remember my feelings when, as a child, I had to ride cold commuter trains from the village of Artemovsky to Vladivostok for the sake of attending classes. I was very lucky with the teacher — Zinaida Alekseyevna Bespalova — with her there was simply no time to think whether I had made the right choice.

I came to love music consciously much later: at competitions and concerts I enjoyed being in the focus of everyone's attention, I liked to perform and, perhaps, from childhood I liked a different sense of time. This feeling is difficult to explain: it is like you are in control of time when you're on stage.

YOU HAVE STUDIED IN MOSCOW, AND THEN IN COLOGNE AND BRUSSELS. WHAT DOES SUCH A VARIED BACKGROUND GIVE YOU?

Different schools give freedom of choice. When you keep different points of view on the same question in your mind, you can find the most optimal approach. I had a real Soviet violin school at the Central Music School, to which European and American traditions were later added - the studies at the Cologne Higher School of Music and the Queen Elizabeth Music Chapel in Brussels. I studied in Russia until I was 18, and here I developed into a professional. However, in Europe I was shown a different type of musical thinking: a different way of deciphering the musical text, a different stroke technique, and a different approach to emotionality. Knowing all this, now I can make my choice among many options.

HOW DO YOU ASSESS THE ROLE OF FATE IN YOUR LIFE?
I am sure that in all the most important decisions in my life I have always been led up to, whether it was admission to the Central Music School and acquaintance with Rostropovich, or an audition for the Academic Symphony Orchestra of the St. Petersburg Philharmonic, or the Mariinsky Theatre Orchestra, and, of course, the meeting with Teodor Currentzis. Everything happened very naturally: I never planned those turning points and did not prepare for them. I am absolutely confident in fate and trust it. Sometimes at first at heart you don't even agree with what is happening, but at those moments you have to force yourself to believe: "It's necessary, time will pass — and you will know why." I believe in God and, although I do not consider myself to be strictly observant, I always talk to higher forces that guide me.
HOW DID YOU MAKE YOUR WAY TO MUSICAETERNA?
I have been acquainted with Teodor for a very long time, I worked with him as a guest musician ten years ago. Even then he offered me to work together, but at that time I was not ready to play in an orchestra and was developing a solo career. Then I was in the Mariinsky Orchestra for a long time, and a year ago I decided to leave — so our paths with musicAeterna crossed again. I joined the team, where everyone around is already a familiar face: we all know each other well, we have very warm relations. The guys said to me: "Well, welcome home!"

WHAT HELPS YOU COPE WITH A HUGE PROFESSIONAL LOAD?

Sleep saves me! I am like a phoenix: if I sleep in time, then everything is fine, I feel reborn. Otherwise, I do not particularly analyse my condition: that must be done, so we are doing that. I give my best at rehearsals here at Dom Radio, then I go to Mikhailovsky — I give my best there. In fact, your emotional endurance can also be trained. If at some point you start to take care of yourself and not to give out a one hundred per cent result, then there comes that feeling of hitting the ceiling. If you make yourself work at the maximum every day, then you get used to it. Of course, it's hard to play the Swan Lake for the thousandth time in a new way, but if you force yourself to find something to cling to, it works. A person always has something to say!

PLEASE TELL US ABOUT THE VIOLIN YOU ARE PLAYING NOW

At the Mariinsky I played violins by Montagnan, Stradivari, and Guarneri from the theatre funds, and now I play my own instrument. There is also another story that is connected with it — yet another proof that all the important events in my life happen by the will of fate. All string players need to periodically re-hair the bow, and when the time came again, it turned out that my favourite master was simply not in the country. As a result, I had to turn to a master I didn't know before.

When I came to him to pick up the bow, he said: "And look, by the way, there's a little violin waiting there for you." I wasn't looking for an instrument, I was quite content with my own, but I played a couple of notes on that violin. I realized that it sounded good, put it back in its place and went home. In the morning I realized that I was hooked on something in that violin, I really liked it. I urgently called the master to pick the violin, called Teodor and the guys from the orchestra so that they would come to listen and help compare the two instruments… As a result, the very next day I played the new violin in Zaryadye Hall. The instrument itself is old — most likely an Austrian of the 17th or 18th century. The experts who heard it told me it could not sound the way it actually sounds, that it was a miracle!