On January 20, Teodor Currentzis, the musicAeterna choir, and the soloists of the musicAeterna orchestra presented Philippe Hersant’s “Tristia” to the Moscow audience at the Zaryadye concert hall.

In late January, concerts in Perm opened the ensemble’s tour with a programme of Tchaikovsky’s music. Those were followed by performances in Yekaterinburg, Moscow and Saint Petersburg, as well as four concerts in Japan (Tokyo and Osaka). The latter marked the orchestra’s first experience of touring beyond Europe and Russia.

The jury of the CASTA DIVA Russian opera awards declared the 2018 laureates in spring. The premiere of the dramatic oratorio “Jeanne au bûcher” at Perm Opera was named “Event of the Year”. The performance was directed by Romeo Castellucci and conducted by Teodor Currentzis.

March witnessed the start of one of musicAeterna’s biggest European tours to date. The interpretation of Verdi’s “Requiem” by Teodor Currentzis along with the musicAeterna orchestra, choir and soloists was presented in Russia (Perm, Moscow), France (Paris, Aix-en-Provence), Belgium (Brussels), Germany (Cologne, Hamburg), Austria (Vienna), Switzerland (Geneva, Lucerne), Greece (Athens) and Italy. The tour culminated with a concert at San Marco in Milan — the place where the piece had originally premiered under the baton of the composer himself on May 22, 1874. The performance was broadcast by French music TV channel Mezzo, German online music channel takt1, and Medici.tv website.

In May, the 13th International Diaghilev Arts Festival was opened by Mahler’s Symphony No. 9 and the Russian premiere of Malin Bång’s “Splinters of ebullient rebellion”. Both pieces were performed by the festival orchestra, which was conducted by Teodor Currentzis.

The concert performance of Mozart’s opera “Idomeneo” was another premiere at the festival featuring the musicAeterna orchestra and choir.

The audience at the Diaghilev Festival also witnessed the debut of musicAeterna byzantina, a Greek choir founded in 2018 and curated by Teodor Currentzis. The ensemble consists of the best graduates of Byzantine music schools in Greece. At their first concerts, the singers performed Greek sacred hymns, the centuries-long tradition of which has been carefully preserved at Byzantine music schools to this day.

The festival ended with Brahms’s “German Requiem”. The musicAeterna choir joined forces with Mahler Chamber Orchestra, Teodor Currentzis and an international quartet of soloists to perform the Requiem in Perm, Moscow, Dortmund, and at ElbPhilharmonie in Hamburg.

It was officially stated in June that at the beginning of the new season, Teodor Currentzis was going to step down from the position of art director at Perm Opera in order to focus on further development of the musicAeterna orchestra and choir. The ensemble subsequently created an independent management structure and prepared for future tours, educational activities and experimental music projects. The new chapter in the history of musicAeterna was facilitated by support from VTB Bank, Sberbank, and the Alma Mater Foundation.

The main programme of the Salzburg festival in July opened with Mozart’s “Idomeneo”, which had been co-produced by Teodor Currentzis, Peter Sellars and the musicAeterna choir. The performances repeated till August 19. 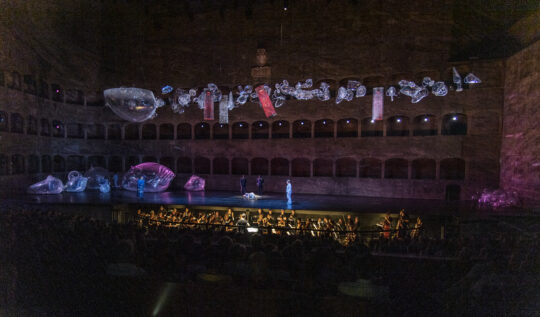 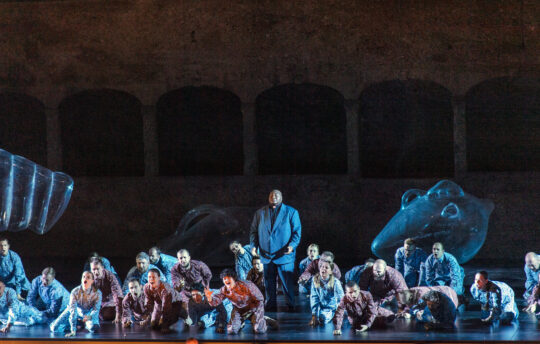 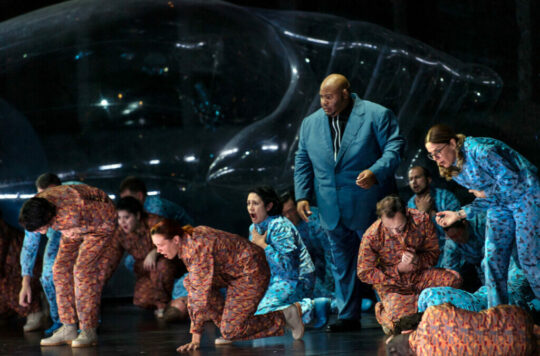 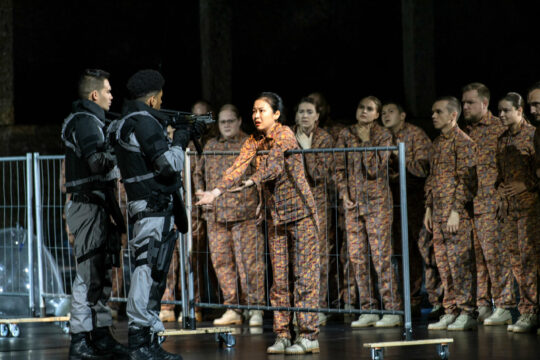 September 1 marked musicAeterna’s debut performance as an independent ensemble. Mozart’s opera “Cosi fan tutte” was performed at the Saint Petersburg Capella. It is a well-known fact that musicAeterna uses period-correct instruments in performances; however, another tradition — “phone-free concerts” — was born on September 1. The audience was prompted to leave their phones out of the concert hall for the duration of the performance, so that they could get immersed into the music with no distraction from the outer world.

Later on in September, the musicAeterna orchestra and choir went on tour with a programme of Mozart’s operas. Semi-staged versions of the Mozart – Da Ponte trilogy were presented in Vienna and at the Lucerne festival. In Bremen and Saint Petersburg, only “Cosi fan tutte” was performed.

Lucerne witnessed the first time that Teodor Currentzis, Cecilia Bartoli and musicAeterna had shared the stage. Additionally, Cecilia Bartoli took part in the September 15 performance of “Cosi fan tutte”, which concluded the festival in Lucerne. 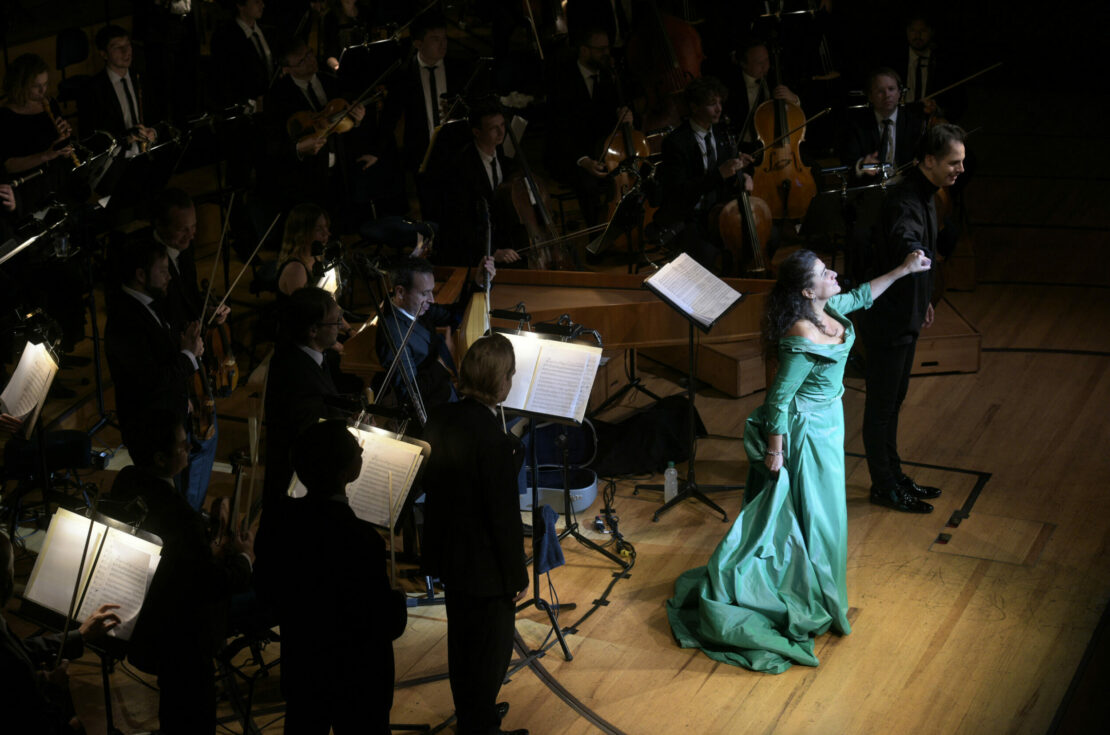 In late September, musicAeterna byzantina made their European debut in Vienna as part of Viennacontemporary-2019. The night performance was attended by renowned artists, educators, politicians and patrons.

At the beginning of October, Hélène Grimaud, musicAeterna and Teodor Currentzis performed piano concerts by Ravel and Bartók along with symphonies by Tchaikovsky and Prokofiev in Luxembourg, Vienna and Munich.

Having briefly returned to Russia, the orchestra joined the musicAeterna choir to take part in the performances of Mozart’s “Requiem” in Moscow and Saint Petersburg.

On October 24, the two choirs — musicAeterna and musicAeterna byzantina — performed together for the first time at St. Isaac’s Cathedral in Saint Petersburg.

Shortly after, the musicians headed back to Europe. The tour began with a performance of the Lux Aeterna programme at Sainte-Chapelle in Paris. The local audience also got to hear Mozart’s “Requiem” along with “Sound of Light”, a programme of Rameau’s musical pieces.

On November 9, the musicians returned to the Grand Hall of the Saint Petersburg philharmonic with another performance of “Requiem” — Verdi’s this time.

Just two days later, the choir went to Athens to perform “Tristia” and Lux Aeterna, a choir programme featuring musicAeterna byzantina. After that, the ensembles headed to the USA for the first time.

Conducted by Teodor Currentzis, the musicAeterna orchestra and choir performed Verdi’s “Requiem” at The Shed on November 19. Following the successful debut, they returned to the concert hall three more times with the same programme. 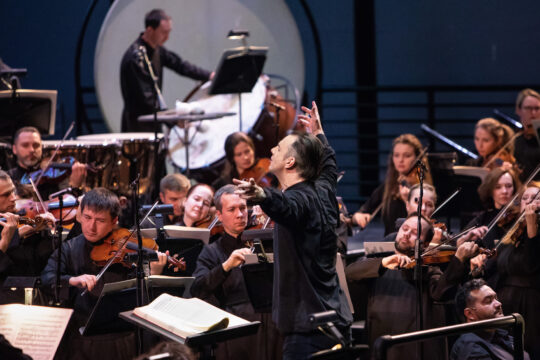 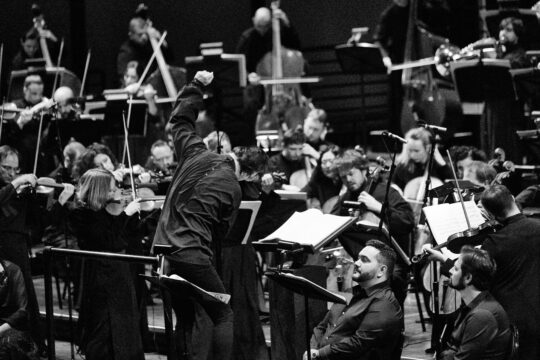 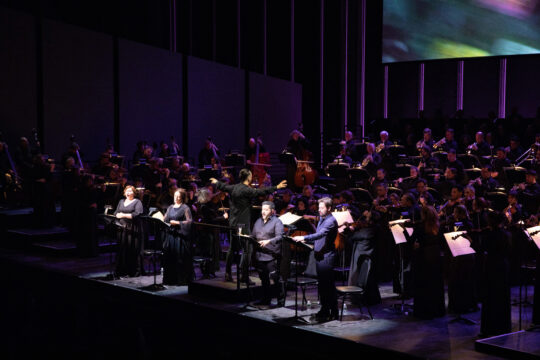 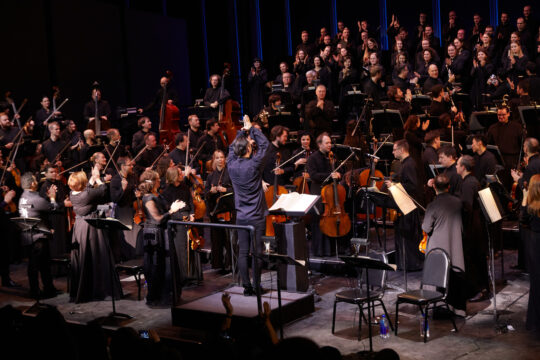 The orchestra went on to return to Saint Petersburg, while the choir was featured in another performance of Verdi’s Requiem together with the Berlin Philharmonic orchestra and Teodor Currentzis. In early December, the singers also collaborated with Le Poeme Harmonique for a concert in Paris.

December marked the beginning of musicAeterna’s cultural and educational programme at Dom Radio, which was opened by renowned philologist Phragisci Abatzopoulou and his lecture titled “The great stranger: Literature of new Greece”. The first Modern Audience Laboratory in Saint Petersburg followed up on December 22-29, focusing on the upcoming New Year’s performance of “Rameau: The Sound of Light” by musicAeterna and Teodor Currentzis in Saint Petersburg. Before turning to Rameau’s music, the orchestra also performed Mahler’s Ninth Symphony twice in Moscow: at the Grand Hall of the Moscow Conservatory and at the Zaryadye concert hall.