The first composer residency began at Dom Radio in January. Aside from working on new music, composer Alexey Retinsky participated in an educational programme. Titled “Music: the mirror or the reflection?”, the first roundtable discussion was focused on the nature and expressive capabilities of the musical language. Along with Retinsky, the talk also featured Teodor Currentzis, Leonid Desyatnikov and Nikolay Komyagin.

In February, a new development — “musicAeterna: underground” — was launched at the cultural and educational centre at Dom Radio. The project opened with a concert by six Young Echo representatives from Bristol.

The second cycle of the Modern Audience Laboratory in Saint Petersburg was focused on the upcoming series of Beethoven’s symphony music performances conducted by Teodor Currentzis and Giovanni Antonini. The First and Third Symphonies were played in Moscow and Saint Petersburg. 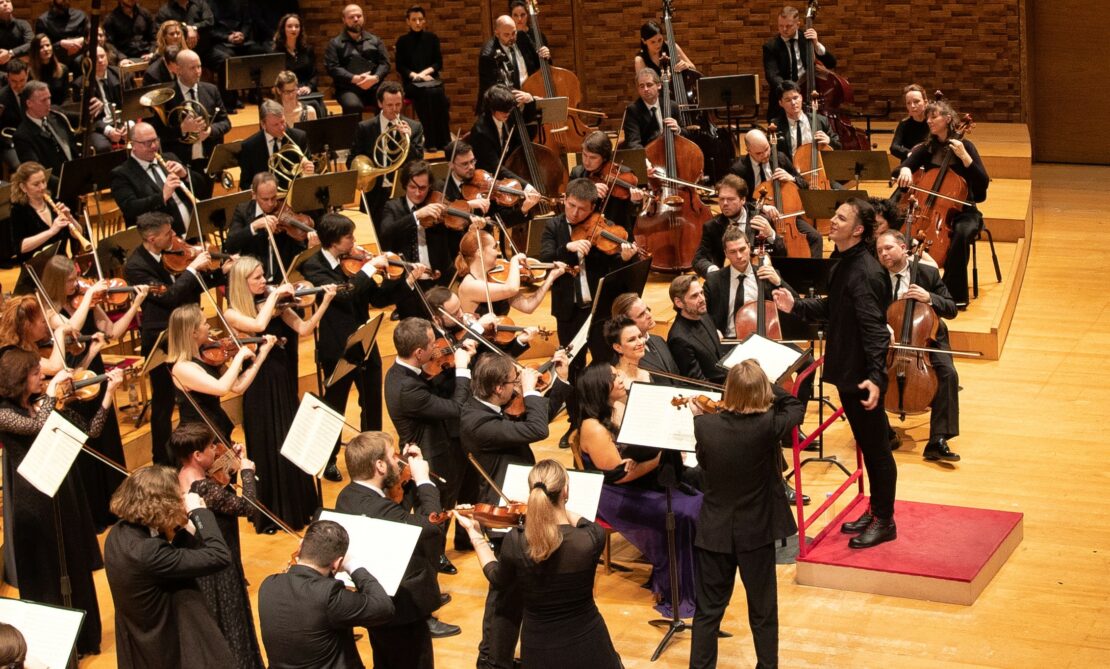 musicAeterna became the only Russian orchestra to have been invited to perform all of Beethoven’s symphonies in Bonn and Vienna for the composer’s 250th anniversary.

The global lockdown struck in March, causing the “Beethoven tour” across Austria, Germany, Switzerland, South Korea and Japan to be delayed indefinitely. The ensembles went into self-isolation mode but continued rehearsing and recording chamber programmes at Dom Radio whenever possible. The final rehearsals of Beethoven’s Symphony No. 9 were recorded on video to later be featured in the “Plan B” documentary.

On April 3, the recording of Beethoven’s Fifth Symphony was released by Sony Classical (worldwide CD sales started on June 12).

The same day witnessed the start of musicAeterna’s virtual creative residency at musicaeterna.org. The ensemble’s official website hosted the musicians’ best recordings along with new and past lectures from the Modern Audience Laboratory. Members of musicAeterna created exclusive programmes and recorded chamber performances specifically for the platform. In May, five episodes of FM Module (a podcast in English by FM Einheit) were published on musicaeterna.org. Twenty episodes of FM Module were released overall in 2020.

On May 31, “Plan B” premiered at musicAeterna’s digital platform. The documentary is a pondering by Teodor Currentzis and Sergey Nurmamed on the new flow of time in the pandemic era.

Chamber music recordings by musicAeterna members kept appearing on the online platform throughout the summer.

In September, the recording of Mozart’s Fifth Symphony by musicAeterna and Teodor Currentzis was included in the shortlist of the prestigious Gramophone Classical Music Awards 2020 in the “Orchestra of the Year” category.

A cultural and educational programme was launched at Dom Radio in accordance with all the safety rules and regulations. The “Byzantine Gifts” project was opened with a roundtable discussion titled “Hagia Sophia. The world before and after”. The project consisted of multiple lectures and discussions featuring guest experts. Each month, a new topic became the project’s focal point: history in October, religion in November, and literature in December.

On September 24, “The Donkey” by Anatoliy Vasilyev opened a cycle focusing on experimental cinematography and video art at Dom Radio. Each piece was presented to the audience by cinematographers, critics, curators and artists.

As part of the “Russian Creative Week”, the musicAeterna orchestra and Teodor Currentzis performed live at Zaryadye for the first time after the lockdown. The first part of the concert focused on 10 centuries of choral music in “Lux Aeterna”, while the second featured chamber ensembles by Nono, Nikodijevic, Retinsky, Knaifel, Scelsi, Dowland, Pärt and Xenakis. 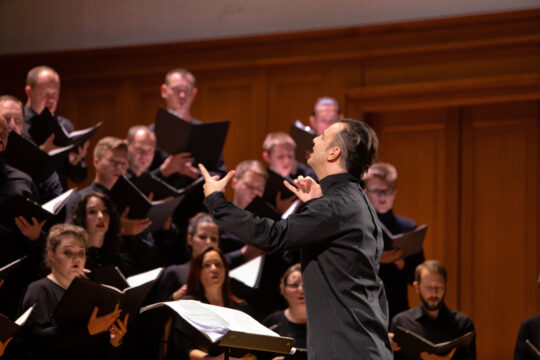 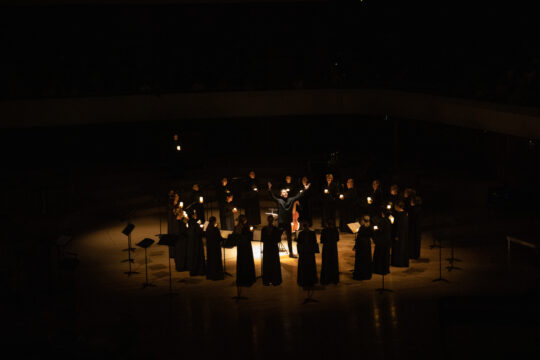 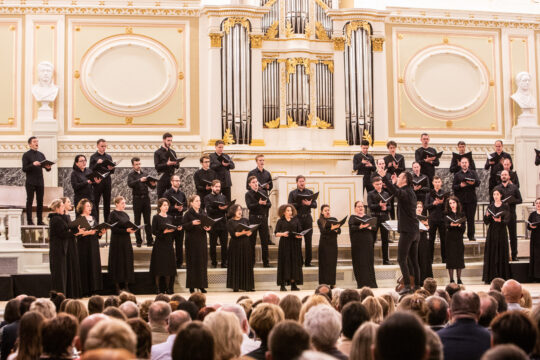 The first post-lockdown live concerts of the musicAeterna choir took place early in October at the Saint Petersburg Capella and in Moscow. The singers performed Alfred Schnittke’s Concerto for Mixed Choir, which had originally been scheduled for April 24.

The performances were preceded by an online Modern Audience Laboratory, which ran from May to September and focused on Alfred Garrievich’s life and work.

Additionally, an online guide titled “What You Need to Know About Schnittke’s Choir Concerto” was published with support from VTB Bank. In 2021, the guide would lead the musicAeterna team to become the bronze laureates of the prestigious Tagline Awards in the “Best Promotional Website” category.

The year of Tchaikovsky’s anniversary saw the Modern Audience Laboratory adopt an extended format to focus on the composer’s works. The programme was opened on October 9 with musicAeterna’s performance of the Serenade for Strings and the “Souvenir de Florence” string sextet. The Laboratory also included a cycle of lectures on the geography of Tchaikovsky’s life and work, his Violin Concerto and Sixth Symphony. Dom Radio resident Alexey Retinsky also performed as part of the programme.

The musicAeterna byzantina choir resumed its performances in November. On November 1 and 8, twelve singers conducted by Antonios Koutroupis presented a programme of Byzantine chants on Cyprus.

On November 18 – 20, musicAeterna went to Perm to participate in “Diaghilev +”, a project by the Diaghilev Festival in a pandemic-specific format. All of the 3-day marathon’s performances featured the musicAeterna orchestra and choir under the batons of Teodor Currentzis and Fyodor Lednyov. The musicians played Retinsky’s “Krauseminze” and “Rex tremendae”, Brahms’s Symphony No. 4, as well as pieces by de Machaut, Pärt, Syumak, Lachenmann, Lang, Dowland, Scelsi and Xenakis. 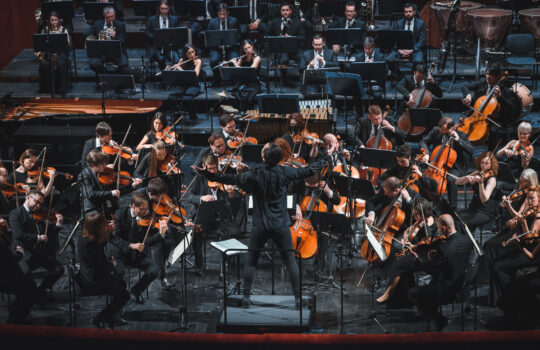 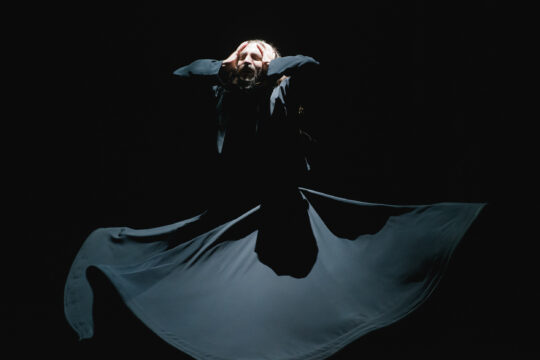 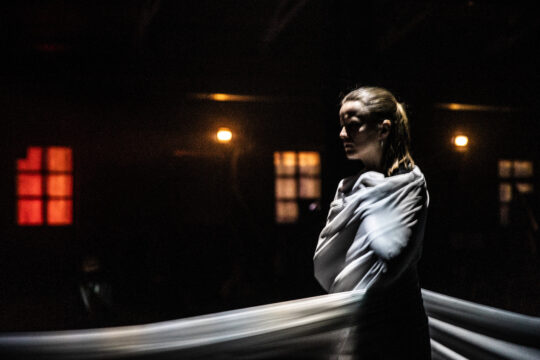 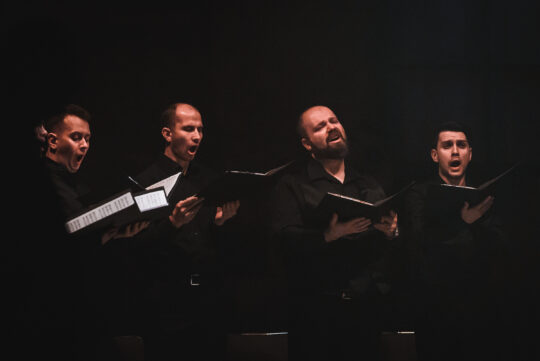 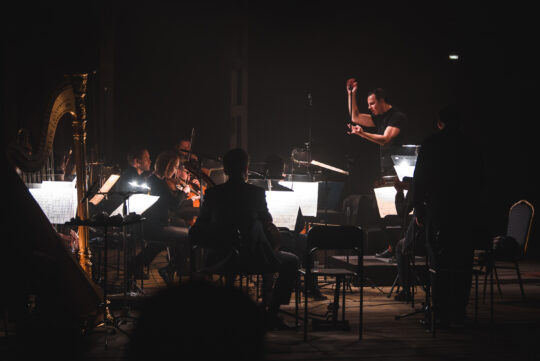 The new season’s first symphony concerts of the musicAeterna orchestra took place in Saint Petersburg and Moscow on November 23 – 25. Conducted by Teodor Currentzis, the musicians performed Brahms’s Symphony No. 4 and Piano Concerto No. 2 (with Vadim Kholodenko as the soloist), as well as “Krauseminze” by Alexey Retinsky.

Previously released by Sony Classical, the recording of Beethoven’s Fifth Symphony by musicAeterna and Teodor Currentzis got nominated for Edison Klassiek awards and was also included on the longlist of International Classical Music Awards.

“Fragments”, musicAeterna’s collaboration with Sony Classical, was released in December. The project is a series of audio and video recordings of excerpts from various operas. A segment of Verdi’s “La traviata” became the first Fragment to be published.

Before the New Year, Teodor Currentzis and musicAeterna performed at Dom Radio several times with a programme of old and contemporary music.