On February 22 and 23, the musicAeterna orchestra conducted by Teodor Currentzis gave their first symphonic concerts in 2021. The musicians presented a new programme in the Zaryadye Hall in Moscow having performed works by the greatest composers of the 20th century: Debussy’s Prelude to “The Afternoon of a Faun”, Ravel’s “Le Tombeau de Couperin” and Stravinsky’s “Pulcinella” Suite. On March 1, the programme was repeated in the Grand Hall of the St. Petersburg Philharmonia.

On March 27 and 28, the premiere of the one-woman show “Judith” based on the text by KLIM and directed by Boris Pavlovich — a project of the Alma Mater Foundation’s theatre company “Conversations” — was held at Dom Radio, musicAeterna’s creative residence in St. Petersburg. The performance was successfully run in the repertoire throughout the year and received three nominations for the Golden Mask 2022 theatre award.

On April 1, the performance “Resurgence” created specifically for Dom Radio inaugurated the residence of Andreas Moustoukis, the new composer-in-residence of musicAeterna.

On April 9, the performance of Beethoven’s Seventh Symphony by the musicAeterna orchestra conducted by Teodor Currentzis was released on CD and online music platforms. The recording is available as a CD album and in digital format. The album recorded at the Wiener Konzerthaus in August 2018, as well as its counterpart — Beethoven’s Fifth Symphony, became a contribution of the Russian musicians to the celebration of the composer’s anniversary.

From April 21 to 23 musicAeterna was cordially welcomed in Spain with its first post-lockdown European tour. Mozart’s Symphonies No. 40 and No. 41 were performed at the Auditorio Nacional de Música de Madrid and Palau de la Música in Barcelona. 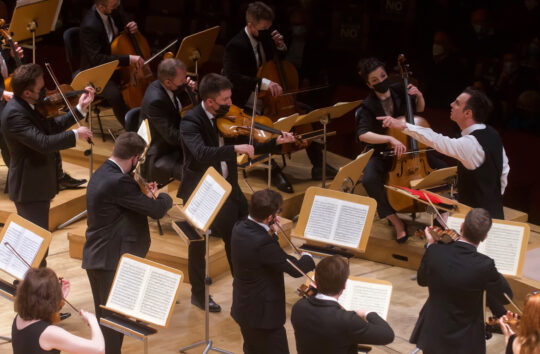 On the Holy Week, the musicAeterna and musicAeterna byzantina choirs performed Byzantine chants in the Cathedral of the Feodorovskaya Icon of the Mother of God in Saint Petersburg.

On May 25 and 26, in the Zaryadye Hall, musicAeterna and soloists conducted by Teodor Currentzis performed Leonid Desyatnikov’s symphony “The Rite of Winter 1949” for the first time, as well as Richard Strauss’s “Death and Transfiguration”.

June saw an art gallery open in Dom Radio, musicAeterna’s creative residence in Saint Petersburg. From June 4 to 20 it hosted the Summer Exhibition, a joint project by musicAeterna in partnership with the Aksenov Family Foundation and the Pushkin State Museum of Fine Arts. At the exhibition, the works by Russian and international stars of contemporary art including works by Bill Viola from his Martyrs series were presented. On October 25, an Alexander Rodchenko’s photo exhibition organized in partnership with the Still Art Foundation and the Lumiere Gallery opened here.

On June 6, musicAeterna and Teodor Currentzis took part in “Beethoven: Nine Symphonies, Nine Cities” online tour, when over a single day nine renowned European orchestras performed all Beethoven’s symphonies in different European cities. The Seventh Symphony presented by musicAeterna in the space of the ancient Greek theatre in Delphi was accompanied by a dance performance by Sasha Waltz & Guests.

From June 10 to 20, musicAeterna took part in the Diaghilev Festival in Perm, having given 10 concerts in 10 days. The festival opened with Leonid Desyatnikov’s “The Rite of Winter 1949” and Richard Strauss’s “Death and Transfiguration”. The festival was also highlighted by “Lux Aeterna”, “Paul Celan Memorial Ceremony” and “Mysteria” programmes by musicAeterna. In the course of the festival, musicAeterna members took part in the “Elizabethan Days of Mercy” programme involving the concerts for the patients of the Perm Hospice and the Children Oncohaematological Centre. The musicians also held the first tactile concert in Russia in collaboration with the Deaf-Blind Support Foundation “Con-nection”. 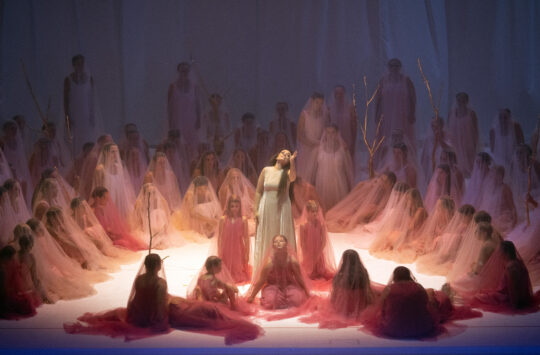 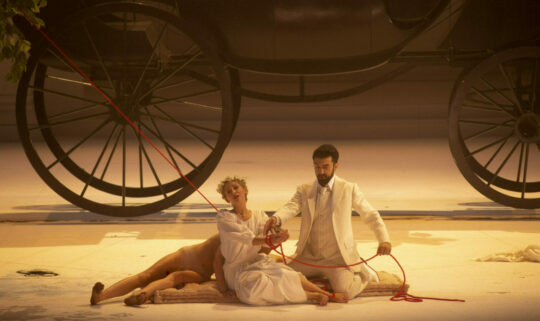 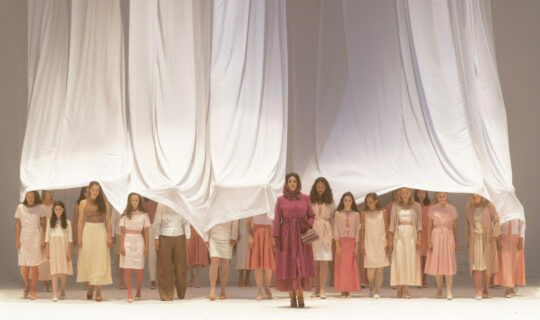 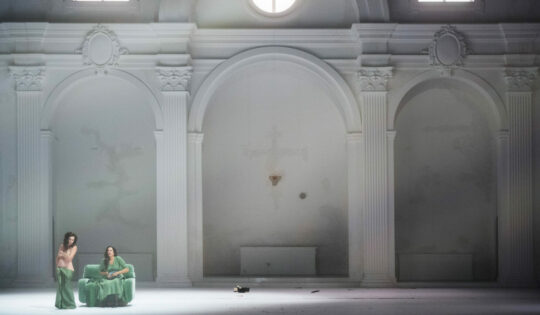 The new season was opened on September 4 with a concert at the Zaryadye Hall in Moscow, where under the baton of Gregor Mayrhofer musicAeterna performed his “Insect Concerto”, “Sea Interludes” from the opera “Peter Grimes” by Benjamin Britten and Symphony No. 9 “From the New World” by Antonín Dvořák.

Meanwhile, the first theatre residence was opened at Dom Radio, musicAeterna’s home residence. Within one month, one of the world’s leading choreographers in the field of contemporary dance, Claudia Castellucci, conducted a seminar with dancers from Saint Petersburg and other cities of Russia. Their work resulted in the production of The New Habit, a performance created in the technique of intuitive dance. The participants of the dance laboratory and the dancers of the Italian Mòra Company “translated” the Valaam Monastery chants performed by the artists of the musicAeterna choir into the language of contemporary dance.

On September 28, the world premiere of Alexey Retinsky’s composition “Anaphora” was performed in the Grand Hall of the St. Petersburg Philharmonia along with Gustav Mahler’s Fifth Symphony. The concert was part of musicAeterna’s large tour. The musicians performed in Moscow, Amsterdam, Lucerne, Vienna, Berlin and Dortmund.

Since the autumn of 2021, musicAeterna has been turning every major tour into comprehensive creative residencies. The project reflects musicAeterna’s creative method and presents a new approach to touring activity. In the largest cities of Europe and the world, the musicAeterna orchestra and choir will not only be giving concerts, but also become an integral part of cultural life, conducting educational programmes as well as experimental musical and theatrical projects. The first performances in this format were held in Moscow (September 31 — October 2) and in Lucerne (October 6–8).

On October 30 and November 1, the collaboration of musicAeterna and the star of video art, one of the leading artists of the Young British Artists movement, Matt Collishaw, was presented in Baden-Baden.  The orchestra and choir performed Gabriel Fauré’s “Requiem” and “Music for Here” by musicAeterna composer-in-residence Andreas Moustoukis, accompanied by video art created by Collishaw specifically for this performance.

In late November — early December, musicAeterna went on a tour to perform Dmitry Shostakovich’s Symphony No. 4 and Toccata for orchestra “Parting of the Waters into Heavens and Seas / Secundus Dies” written by Serbian composer Marko Nikodijevic by order of Teodor Currentzis. The programme was performed in Hamburg, Berlin, Paris, Moscow and Saint Petersburg. Together with its general partner VTB Bank musicAeterna launched a new educational project “What Do I Hear?” introducing the audience to the works performed.

In the autumn of 2021, musicAeterna initiated collaboration with contemporary artists. Inspired by music, they produce works that become the visual basis of the booklets for concert programmes. Well-known St. Petersburg artists of the generation of 30-year-olds, members of the North-7 group Leonid Tskhe and Nestor Engelke were the first partners of musicAeterna. 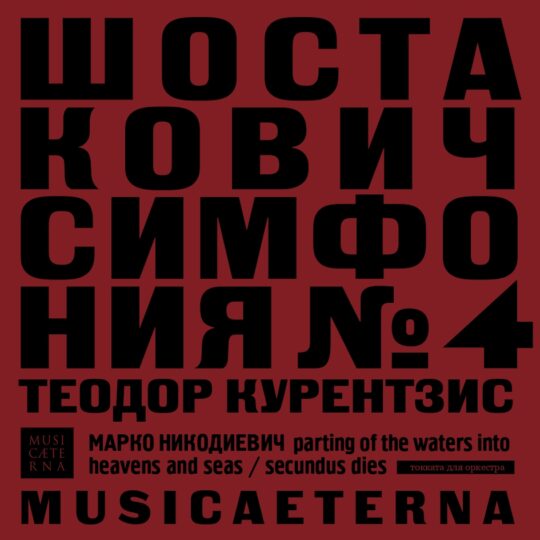 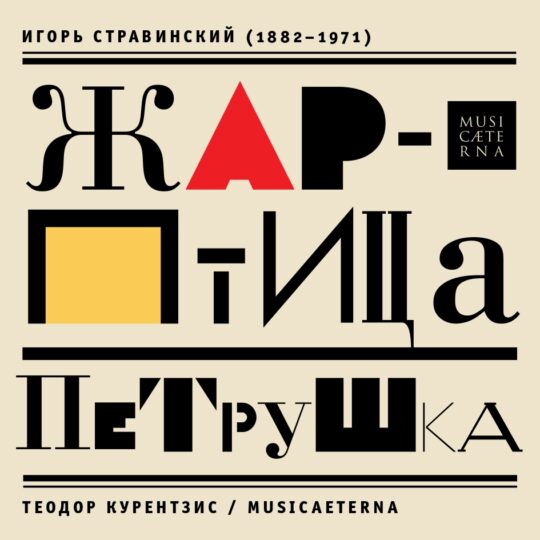 On December 23–25, the musicAeterna orchestra and choir took part in “Diaghilev+”, a special project of the Diaghilev Festival under the artistic direction of Teodor Currentzis. “Diaghilev+” opened with Igor Stravinsky’s ballets “The Firebird” and “Petrushka” in a concert performance by the musicAeterna orchestra conducted by Teodor Currentzis, and closed with a musical and poetic performance “Dedication to Baudelaire” marking the 200th anniversary of the great poet. As part of a complex synthetic extravaganza, several world premieres of chamber works based on Baudelaire’s poems were performed. 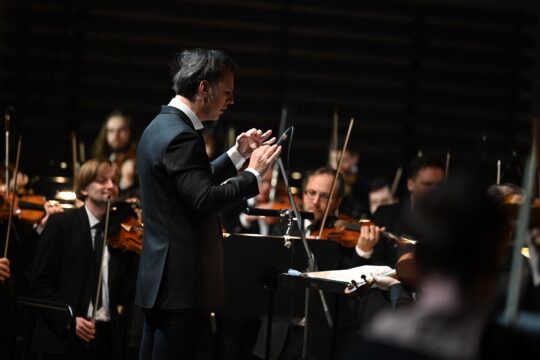 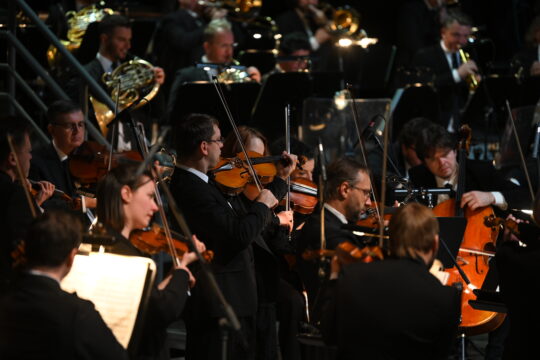 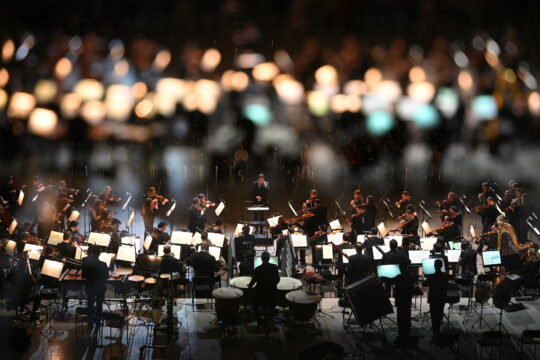 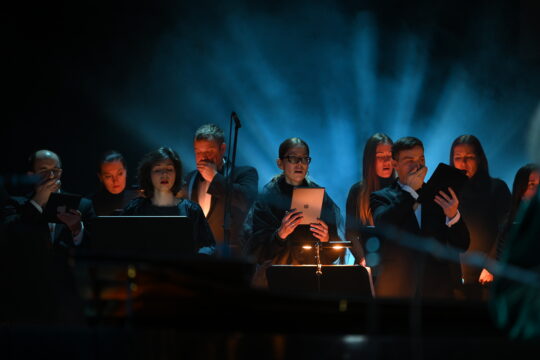 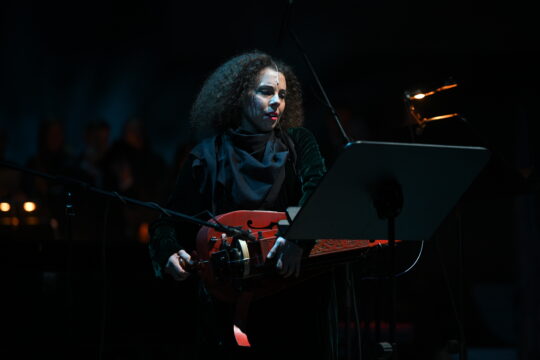 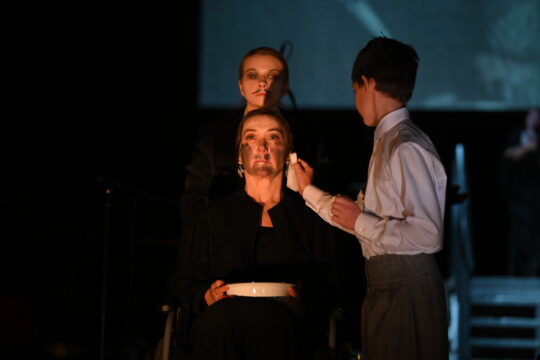 Throughout 2021, the Dom Radio concert posters featured the names of Anton Batagov, Polina Osetinskaya, Vladimir Martynov, Konus Quartet, Vadym Kholodenko, Domenico Nordio and Mikhail Lidsky, Varvara Myagkova, and Pyotr Glavatsky. The soloists of the musicAeterna orchestra and choir gave concerts with a variety of programmes ranging from chamber music of classics and romantics to masterpieces of Baroque music and premieres of the latest compositions.

On December 27 and 29, the symphonic programme “Igor Stravinsky. The Firebird. Petrushka” closed 2021 with concerts in Moscow and St. Petersburg. The last event of the year at Dom Radio was the performance of “Dedication to Baudelaire” on December 30. 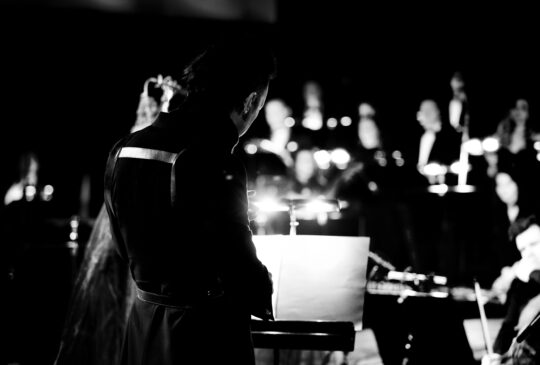 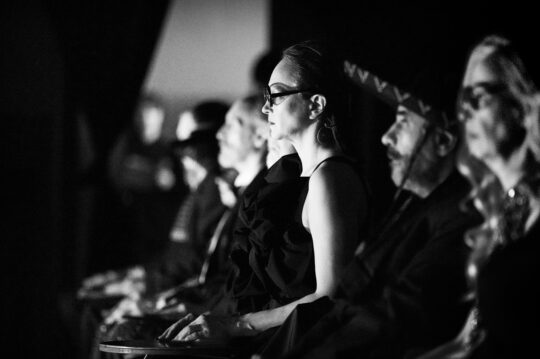 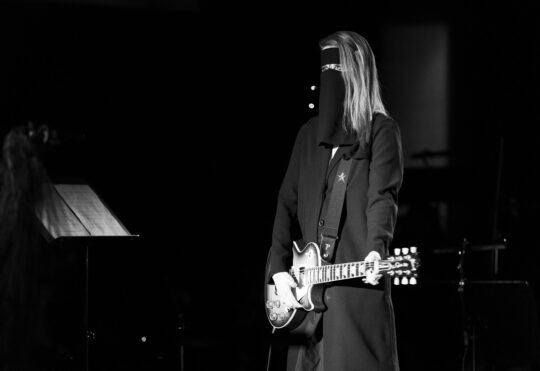 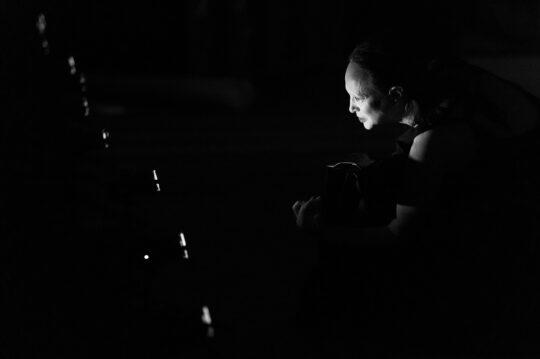 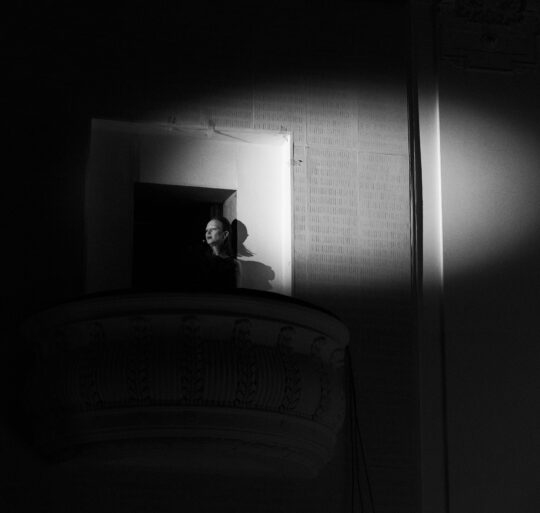 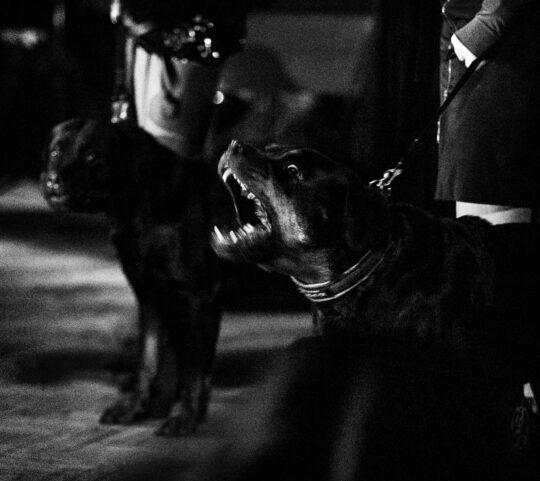 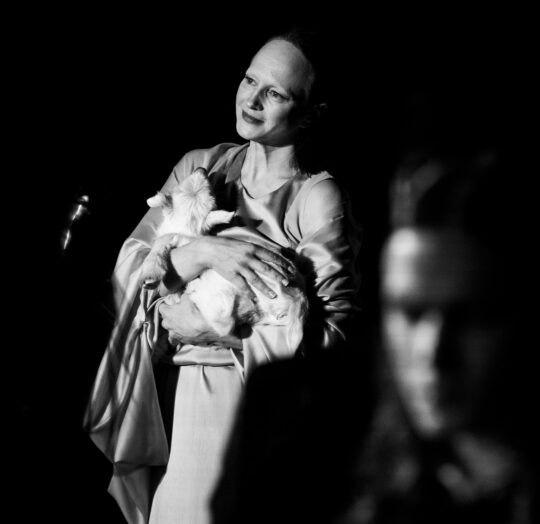 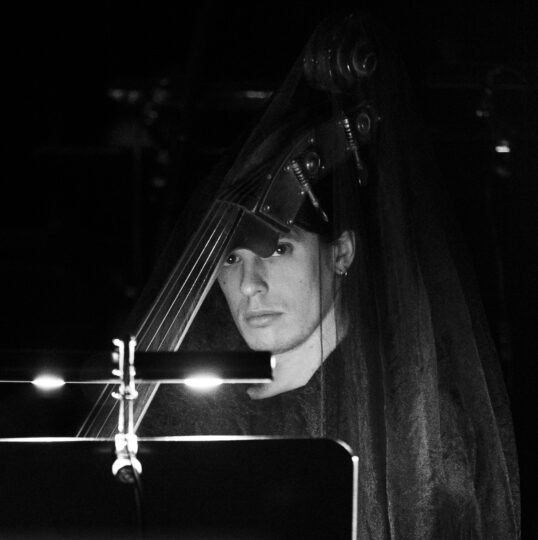 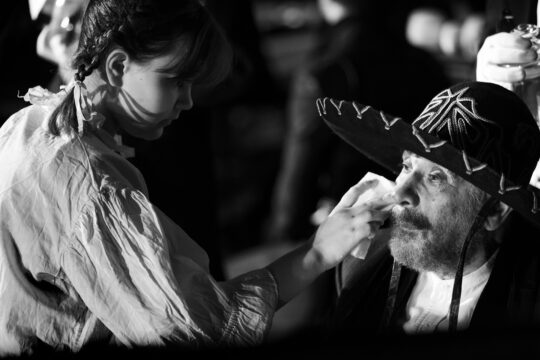 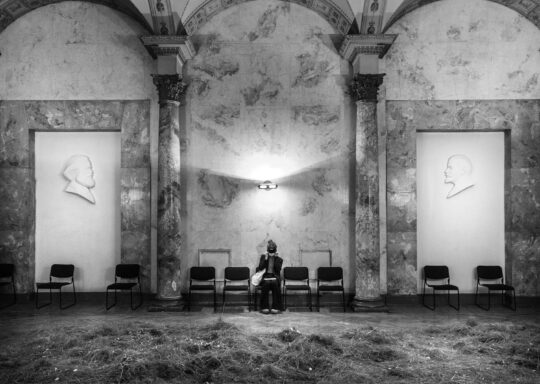